Accudemia: How do I create unique groups per semester using the imports?

Accudemia: How do I create unique groups per semester using the imports?

The ADX tool can be used to create large groups quickly in Accudemia. Sometimes, colleges may wish to keep records of users from earlier semesters. However, if the groups are not renamed, ADX will delete the original group and replace it with a new one. For example, if a group called "Swim Team" was made, the group would be deleted every time this import was run for a new semester. But, if the group was called "Swim Team - Spring 2021" and next semester the group is renamed "Swim Team - Summer 2021," then Accudemia will keep the old Spring semester group as a record. This article will explain how to create multiple groups using the ADX tool, and how to maintain older groups by renaming new ones.

1. Create/edit a CSV file containing different groups of users, and write the semester into the name.

NOTE: For example, if creating two separate groups for athletes and non-athletes, write in names like "Athlete - Spring 2021" and "Non-Athlete."
2. Match the cells on the right to the cells on the left, then finish the import process. 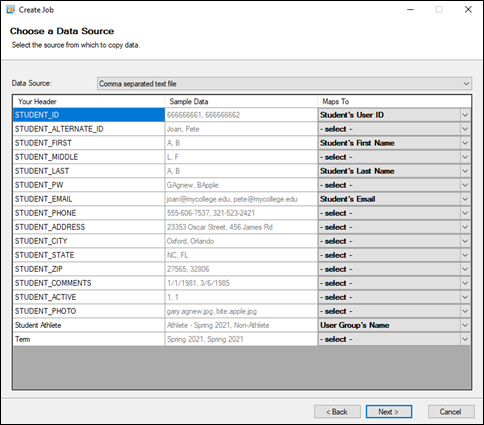 3. Navigate to Administration > User Groups to see the new groups that were created through ADX.

What to do when the next semester begins

1. Create/edit the same CSV file, but update the name of the groups.

NOTE: For example, if the group was called "Athlete - Spring 2021" last semester, make it "Athlete - Summer 2021" for this semester. For the "Non-Athlete" group, keep the name the same.

2. Run the import again, then navigate to Administration > User Groups to see the updated groups for the semester. 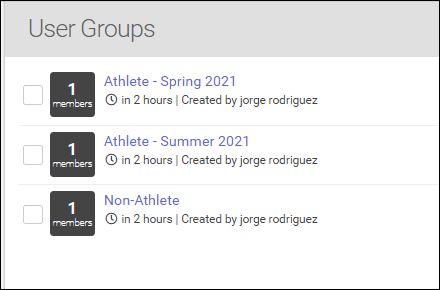 In this example, there should now be a new group called "Athlete - Summer 2021" while the "Non-Athlete" group was replaced with an updated group of the same name.