Using the Group Planner, Supervisors are able to manually allocate Jobs to an Employee’s shift using TAS categories. This Job will then appear in the Employee planner. Requesting an Absence takes this into account as well, and users with certain licenses may be able to copy Jobs using the Find cover feature. These Jobs do not necessarily have to be limited to specific tasks and are entirely customisable. Some example scenarios are listed below:
·         A Supervisor uses Jobs to plan which department a multi-skilled Employee will be working on that shift.
·         A Supervisor in a restaurant uses Jobs to designate the stations their chefs will cover on a given evening.
·         A Supervisor in a school uses the Jobs feature to manage which teacher is teaching which lesson, and then makes use of the Find cover feature to make sure that lessons do not go without a teacher.
·         A Supervisor at an organisation with multiple sites uses Jobs as an easy way of letting their Employees know which site they will be working at on a given day.
Jobs are displayed on the Employee and Group Planner. They will be displayed underneath shifts. They can be differentiated from the shifts by being a smaller box.

Note: The Group Planner display may be able to fit all of the jobs inside the box, but the list can be scrolled up and down to display jobs that do not fit. Alternatively, selecting a shift will show the details in the sidebar.

Before a Supervisor can allocate jobs, the categories defining a job need to be set up. To do this, navigate to the System preferences menu (this can be accessed through the Header pane). You will then need to access the TAS preferences and locate the Rostered jobs section. Click on the box to choose which of your system’s TAS categories can be applied to a job. Multiple categories can be applied to jobs. In this example, a job will have three categories to choose from: the client, the project, and/or the task. 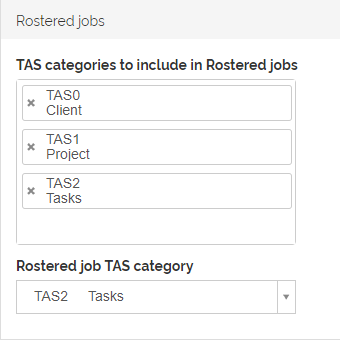 Allocating a Job to a Shift

Jobs are allocated in the Group planner by a Supervisor. Once you have opened the Group planner, you can choose which Employee (or group of employees) you want to view using the tools you normally would at the top of the page.

To add a job to a shift, select the shift in Group planner which will open the shift details on the right-hand side of the page. In the box showing the Shift details, click on the Jobs button to open the job menu. 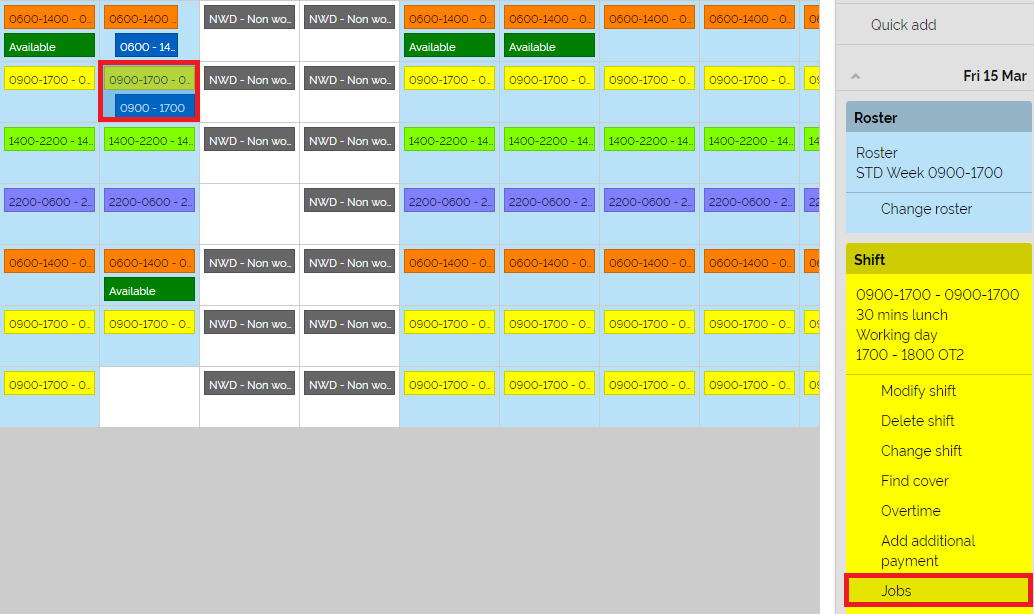 This will open the Jobs page, where that shift's jobs are displated. To add a Job, click the '+; button in the top right:

In the Add job window, you can customise the details of the Job. You can designate the Start time, End time, and the TAS category for the job. If you have multiple TAS categories enabled, you will be able to set multiple options. 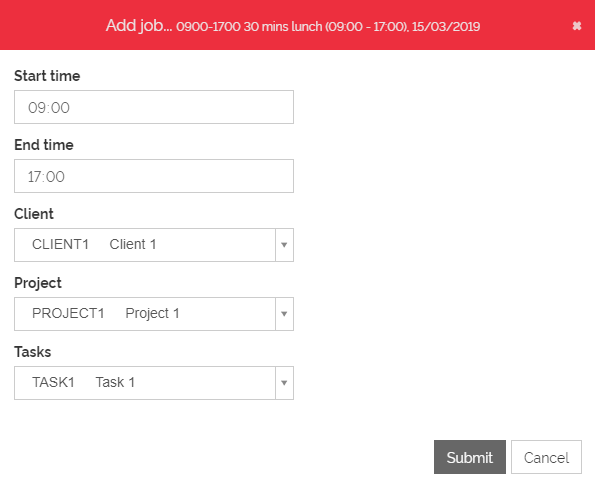 Adding a job will create an entry in the Jobs page of the shift. It will show the details of the job, such as Start time, End time and the TAS categories.

To edit an existing Job in a shift, navigate to the Jobs page. You can then click on any of the fields (like Start time) to bring up the Modify job window. On this window, you can update the Start and End times of the shift, change the TAS categories and Delete the job. Click Submit to confirm the changes: 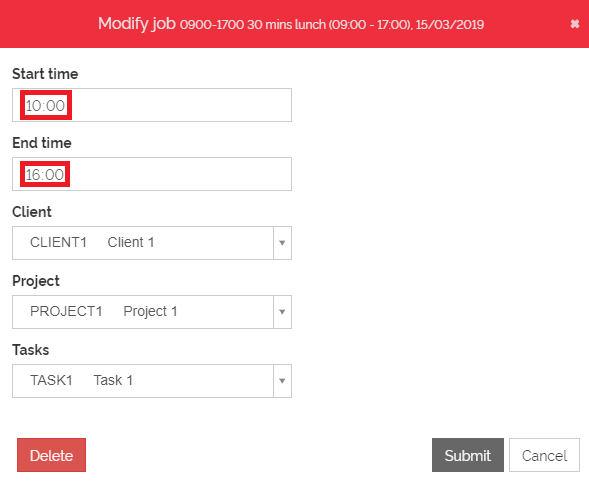 If the shift is altered – in this example to start at 1100 – then the start time of the Job will also change to fit the new shift and extend the length of the Job to keep its original length. It will also keep the original gap between the start of the shift and the start of the Job. Using the example above, this will mean that there will not be enough time in the shift to complete both Jobs. TMS will prioritise the first chronological Job, and cut the final Job(s) short to compensate. If there is still enough time in the shift to complete both Jobs, then the second job will be extended accordingly:

In the example above, the shift has been changed to a 1100-1700 shift, and as a result each job has moved forward by two hours, and the initial one-hour gap has been preserved. The final job has been cut to accommodate the shorter shift. Had the shift been extended, the job would have followed suit.

This also works with the Change shift functionality – if you change the shift template to another pre-existing shift (such as changing a 0900 – 1700 shift to a 0600 – 1400 shift), the jobs will also alter themselves using the same logic as a manual shift change:

Using the Group or Employee Planner, a Supervisor can drag and drop a shift onto another day in order to move the shift. Any Jobs that are applied to this shift will be moved as well.

Similarly, this also works with the copying shifts functionality, which is done by holding the shift key while dragging. This will make a copy of the shift.

Depending upon the allowed TAS Categories in your preferences, Jobs also allow you to assign someone to work in a different department during a shift. If you do so, viewing that department in Group planner will display anybody working “away” from their “home” department. They will only have their shift displayed on the specific day they are working in that department; the rest of the days are blanked out. In the example below, O Cook usually works in the Admin department, but on Thursday 14th, they are working “away” in the Development department.