How to Group Articles in Data Collection

How to Group Articles in Data Collection

On the Data Collection screen, all articles are shown separately by default. However, you might want to consolidate the articles in a study for quicker collection. Here’s how to do that:

1. Each article has its own column and the animals that are not assigned that article are greyed out while the others are shown in white. 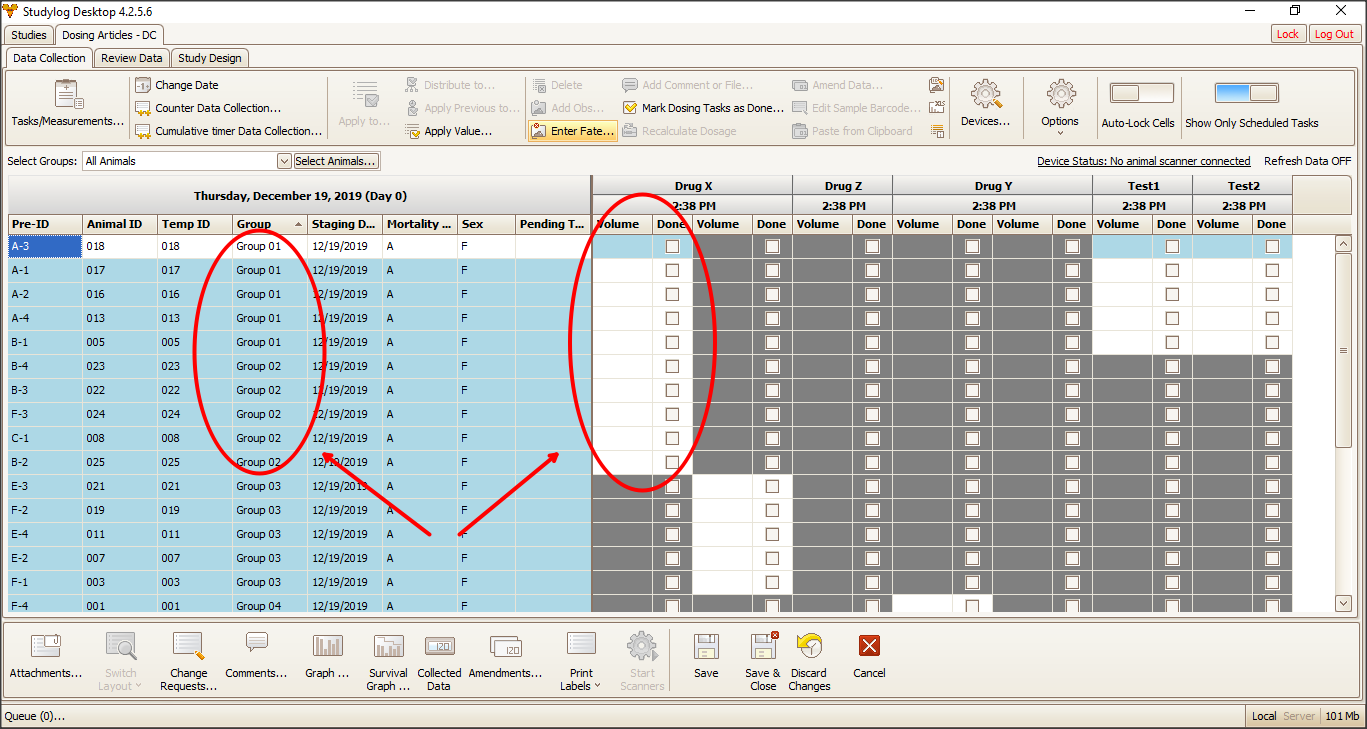 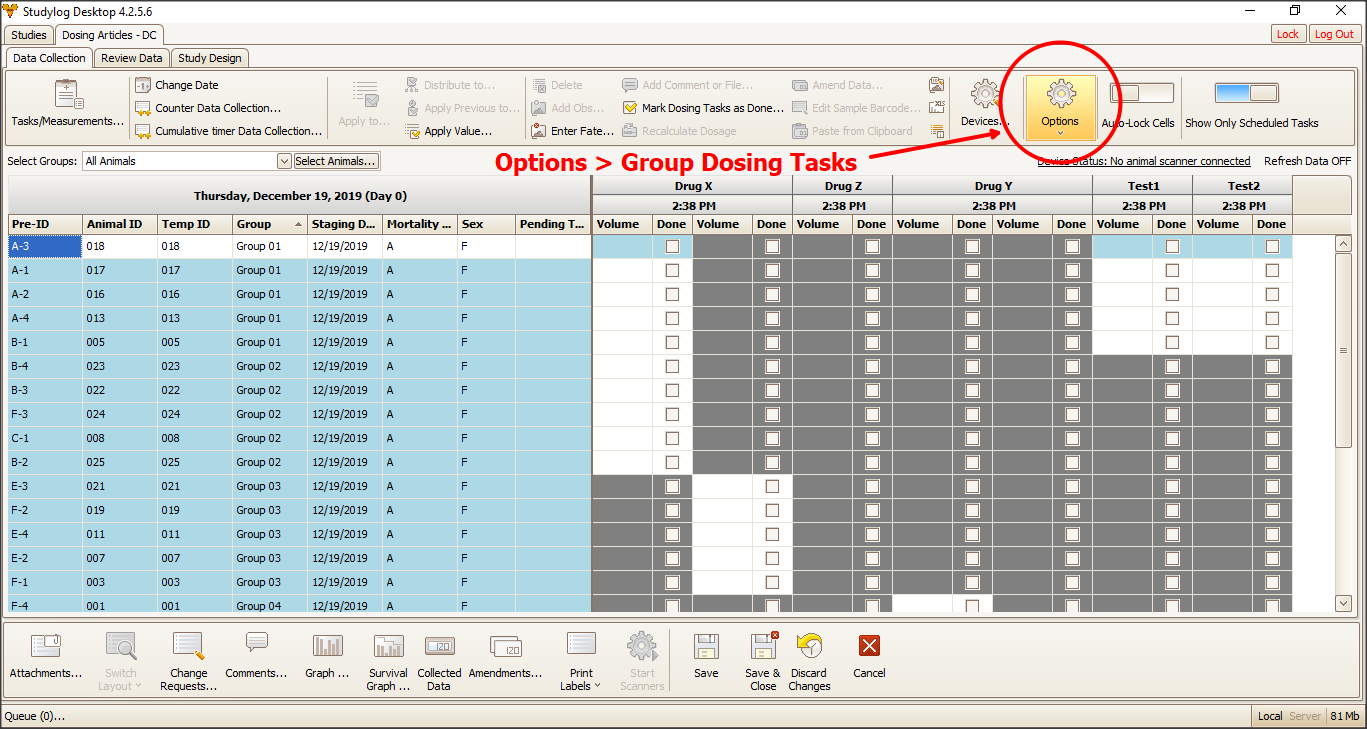 2. Now the tasks will be displayed in a consolidated form. 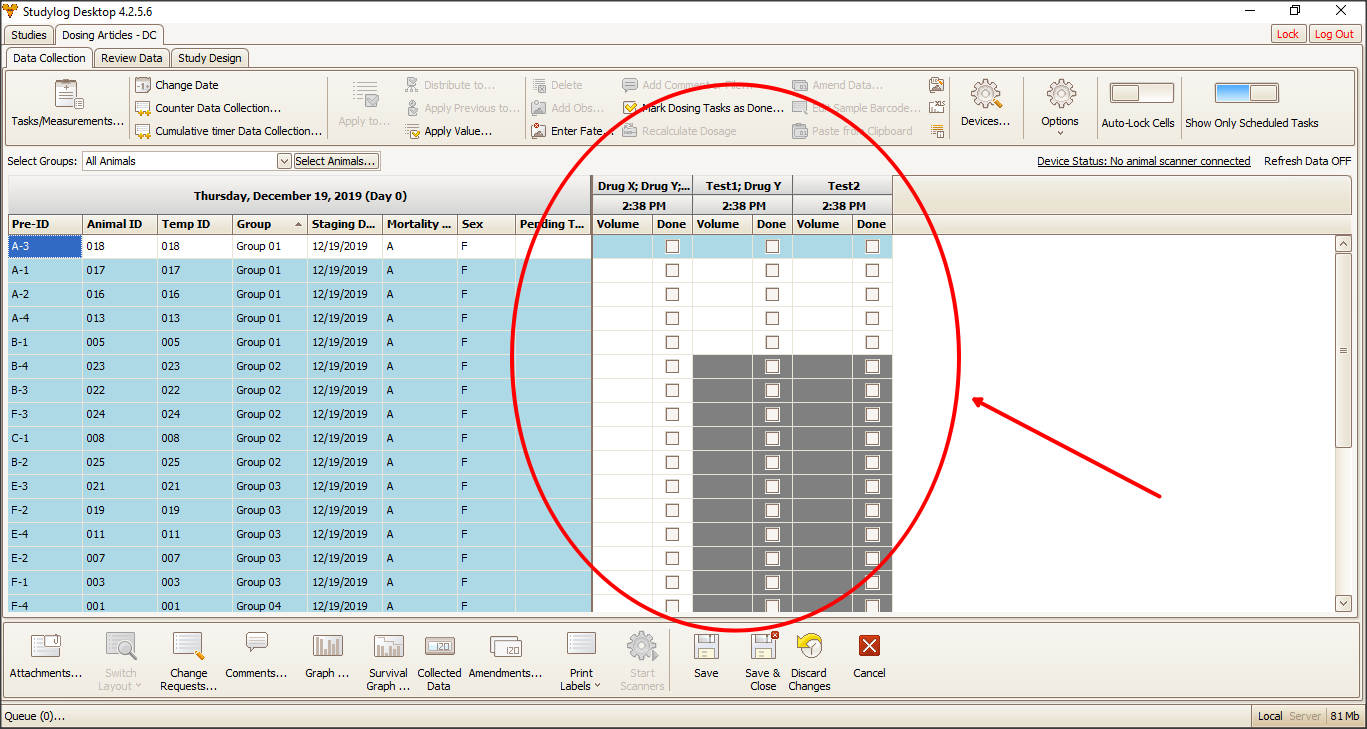 Dosing tasks are grouped according to which group they have been assigned to and also in relation to the other articles assigned to those groups. To illustrate this, let’s take a look at this study’s design. 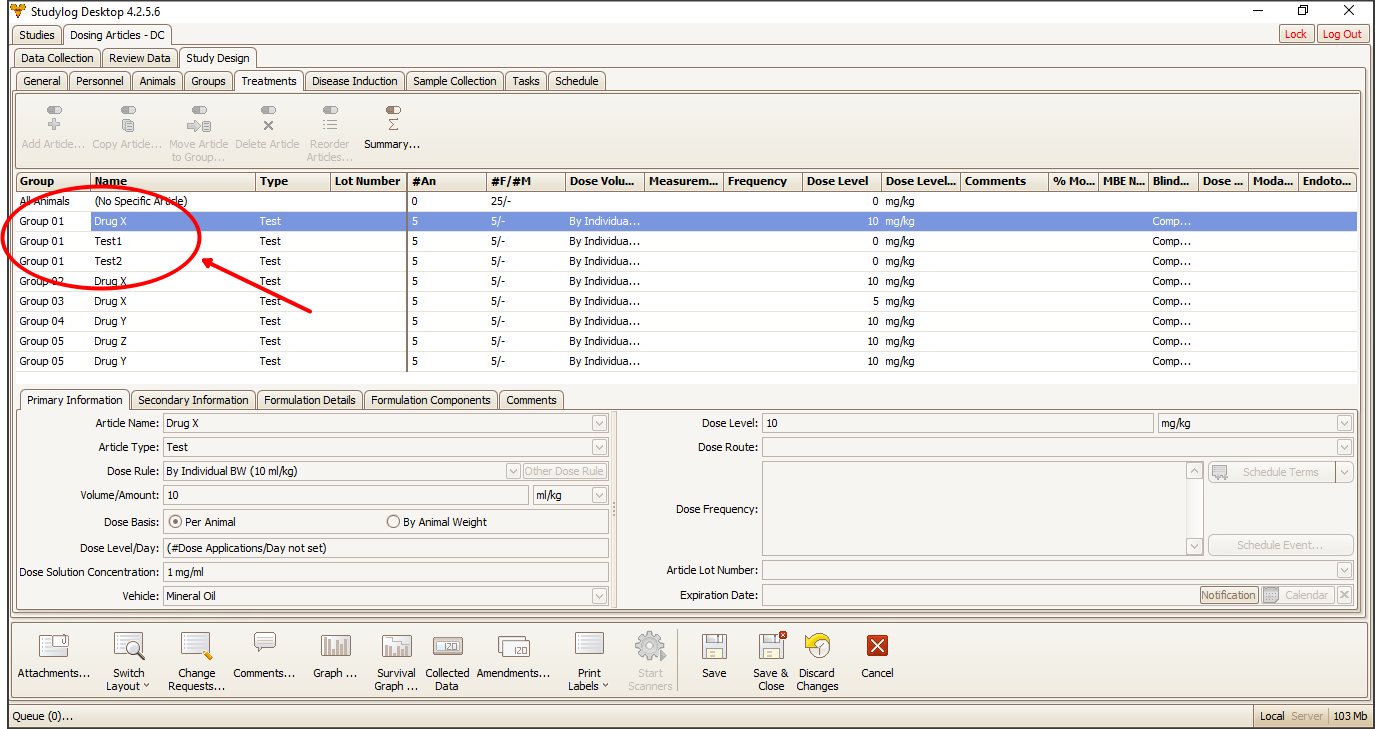 In the example above, Group 1 has three dosing tasks assigned to it. You can think of each of these tasks as occupying a discrete position. This will become pertinent later. Groups 2-4 have a single drug assigned to them, and Group 5 has two drugs assigned to it. It is also important to note which drugs are assigned to which groups. As you can see below, Drug X has been assigned to three different groups: 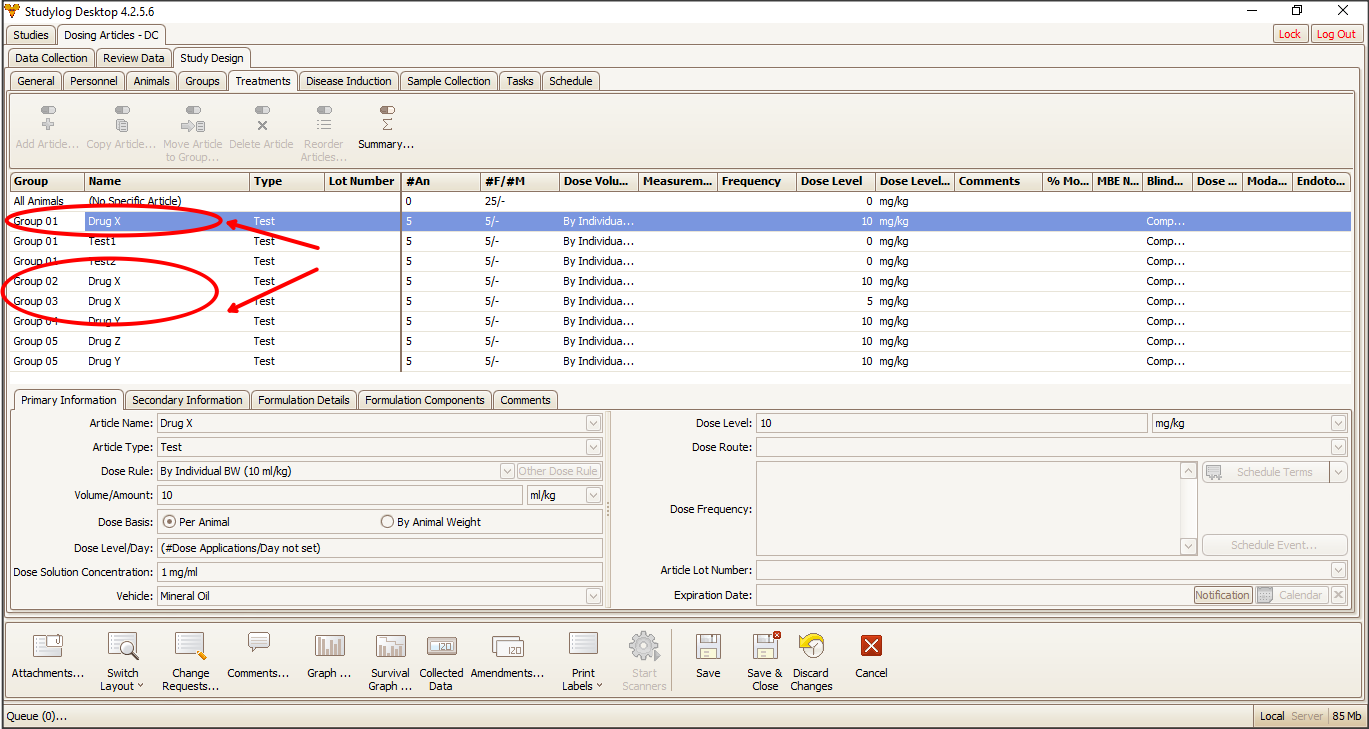 Returning to the Data Collection screen, we can see how the ordered positions of these drugs have been organized in their new, grouped format. 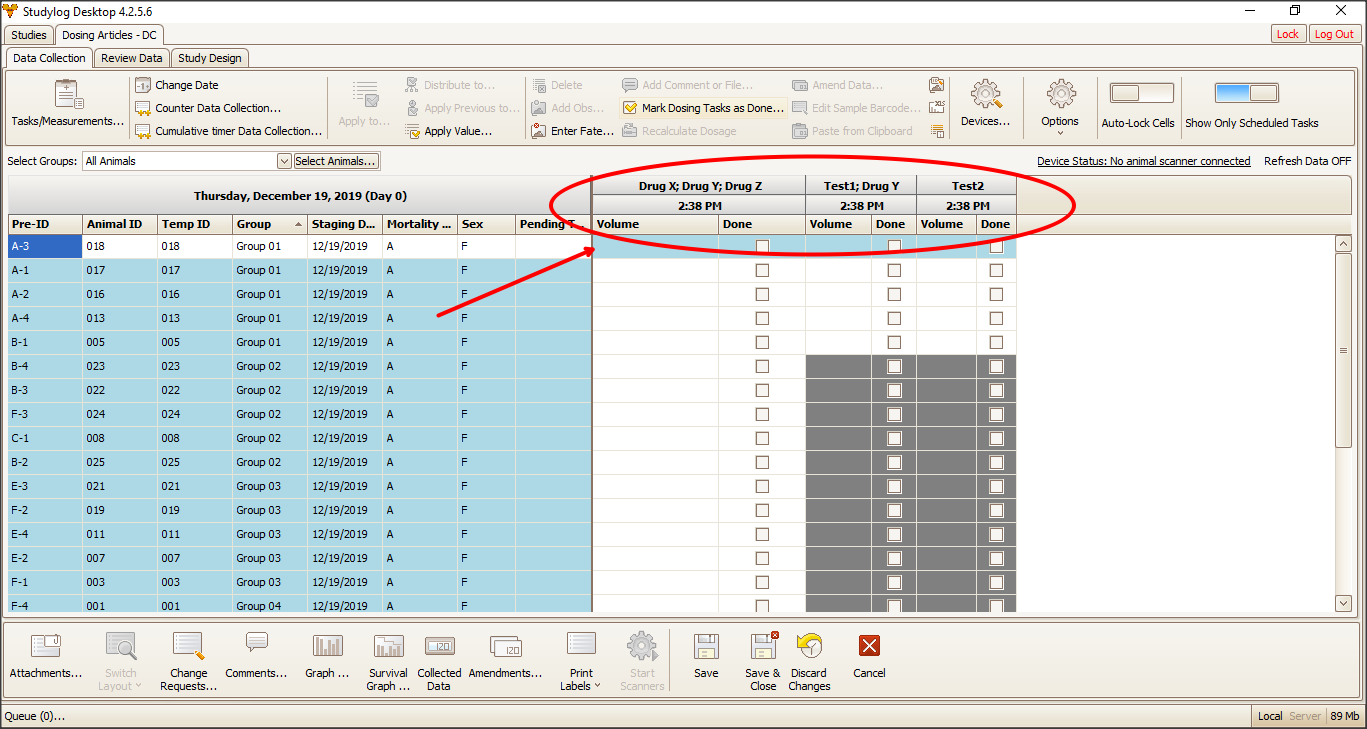 Recalling the concept of positions outlined before, we can make sense of how Studylog has grouped these drugs. The column on the left contains Drug X, Drug Y, and Drug Z because for each of the groups which those drugs are assigned to, these drugs occupy their first position; they are the first drug assigned to each of their respective groups. You’ll note that Drug Y was assigned to both Groups 4 and 5, however it is the Drug Y from Group 4 that has been placed in this first column because it is the first and only drug assigned to Group 4. The second Drug Y has been placed in the middle column along with Test1, as they both are the second drug assigned to their respective groups. Test2 receives its own column as it is the only drug occupying the third position in any group. Here is a look back at the study design as a refresher: 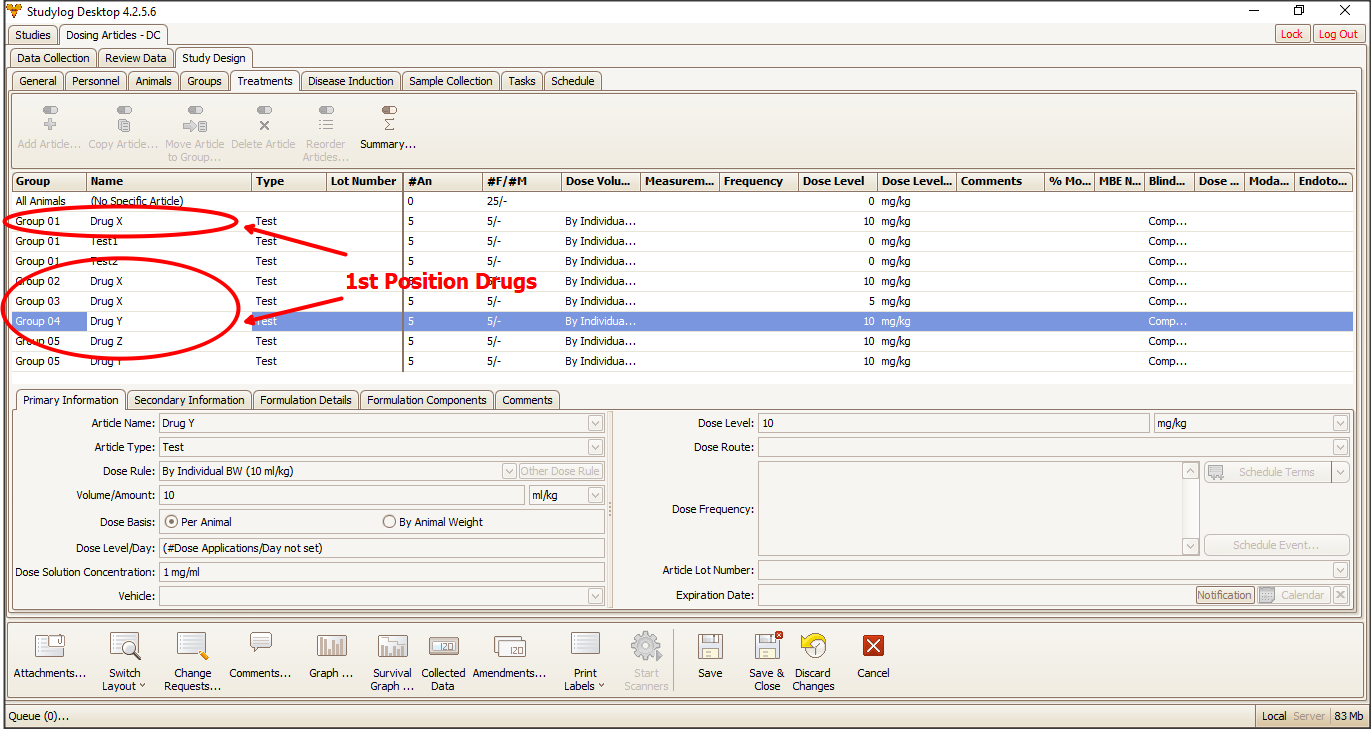 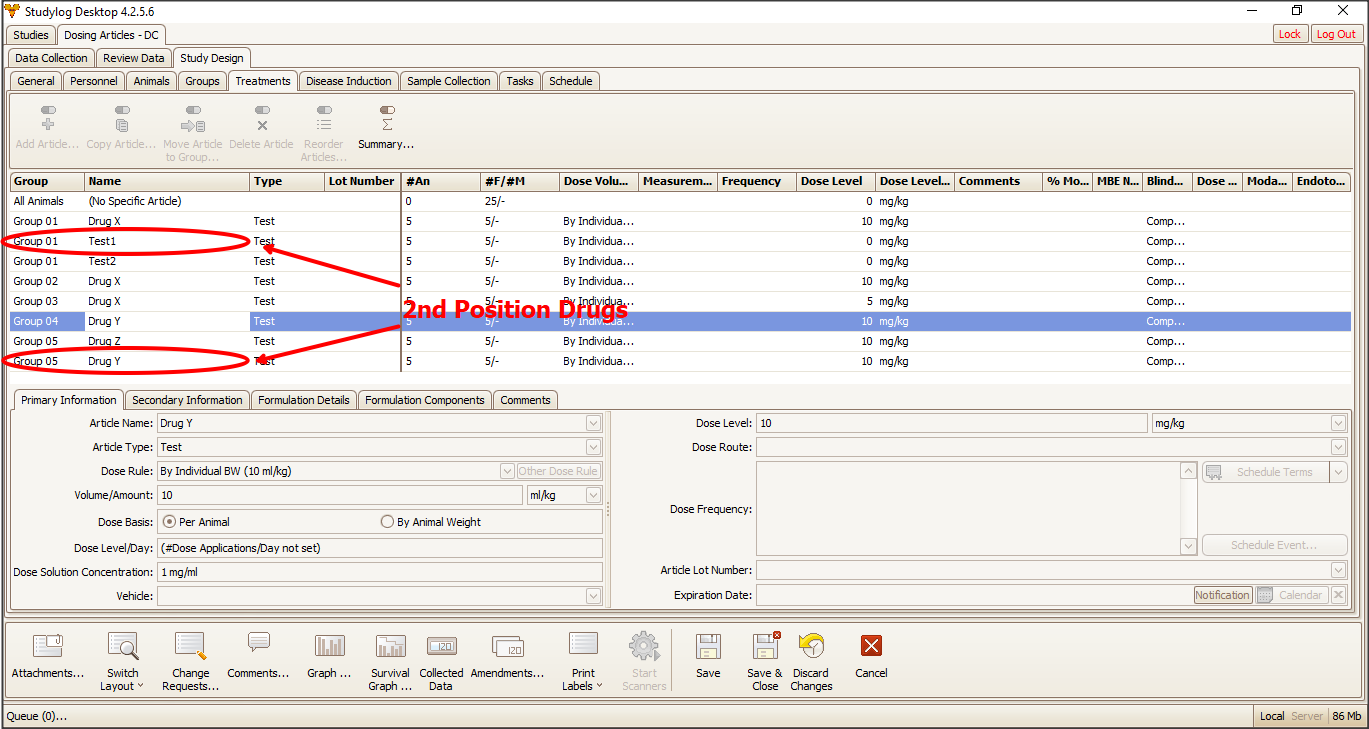 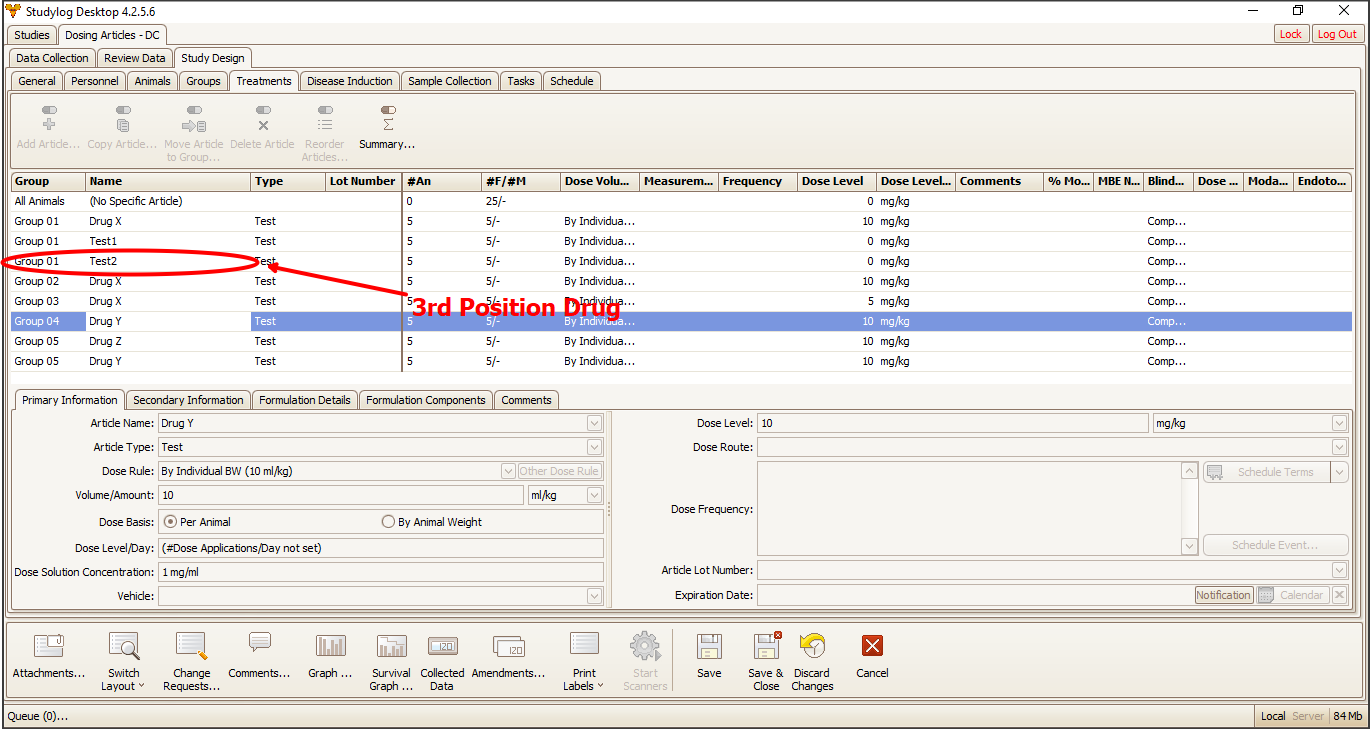 3. If you want to change the order in which articles appear on the screen, close the study and open it again in Edit mode, then click on the Treatments tab. 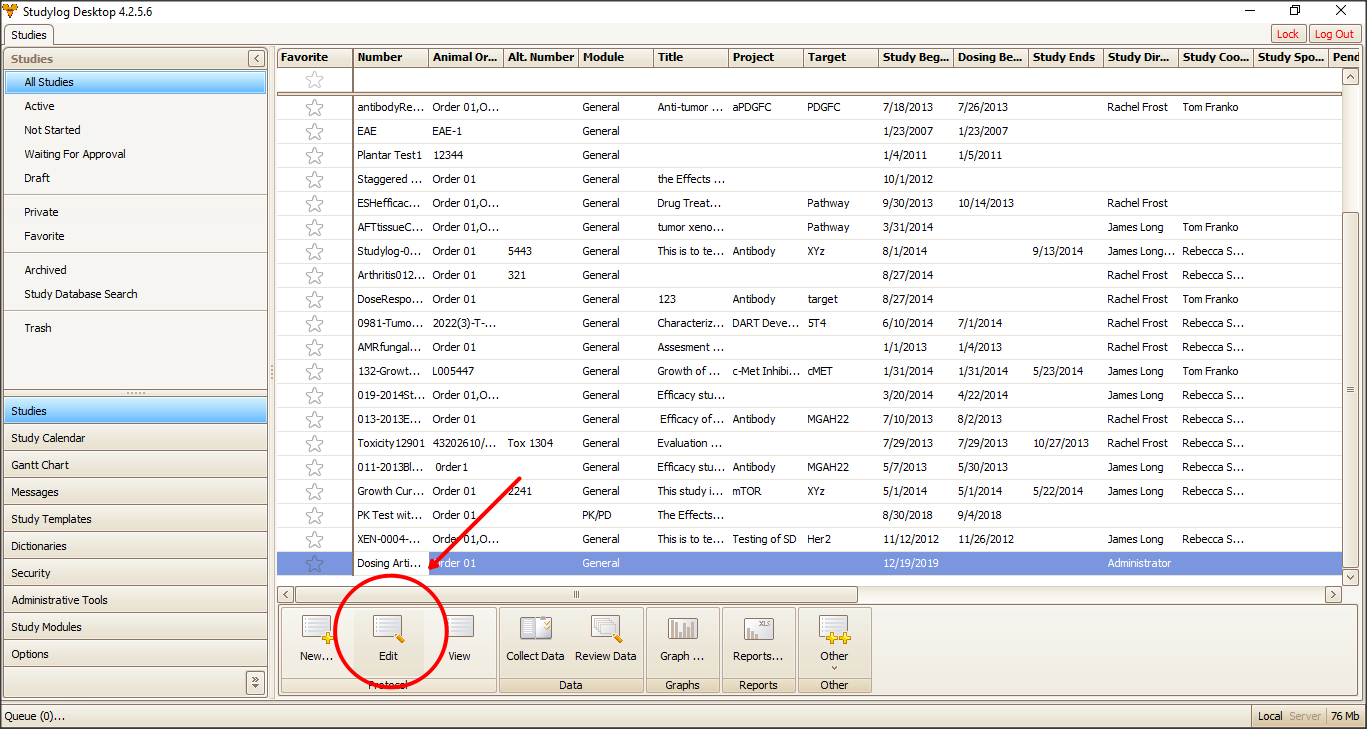 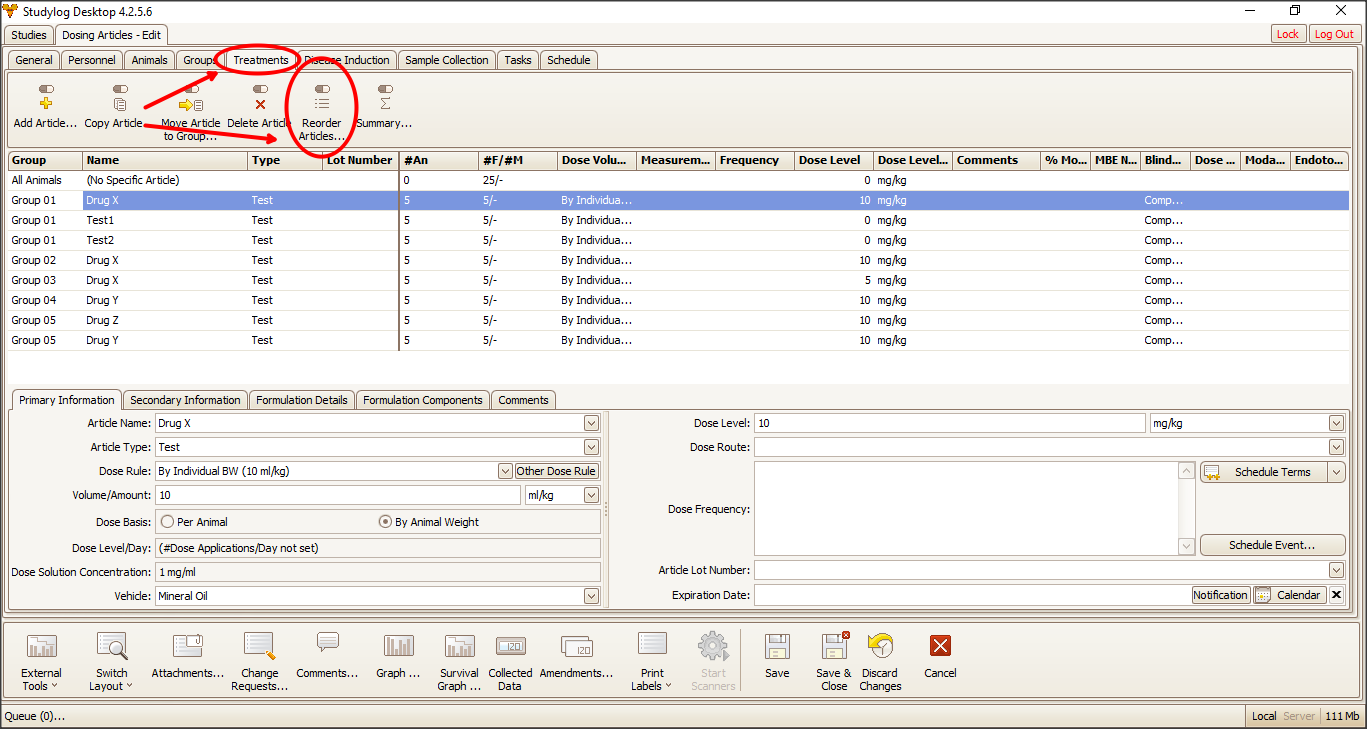 From here, click on any article from a group containing multiple articles, and press [Reorder Articles].

4. In the Order Articles window, you can rearrange the position of each article within a group. To demonstrate this, we will move Drug X to the third position in Group 1 using the [Down] button. 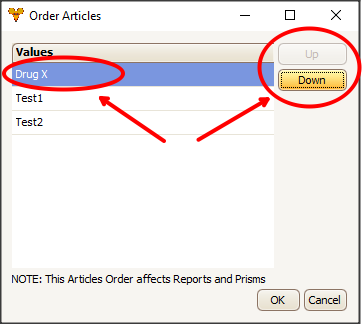 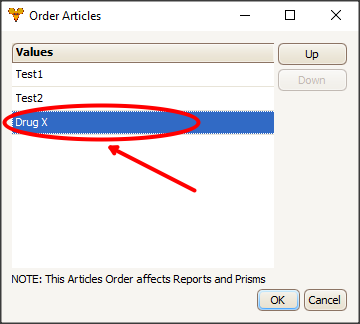 Let’s see how the change in order has been reflected on the Data Collection screen. 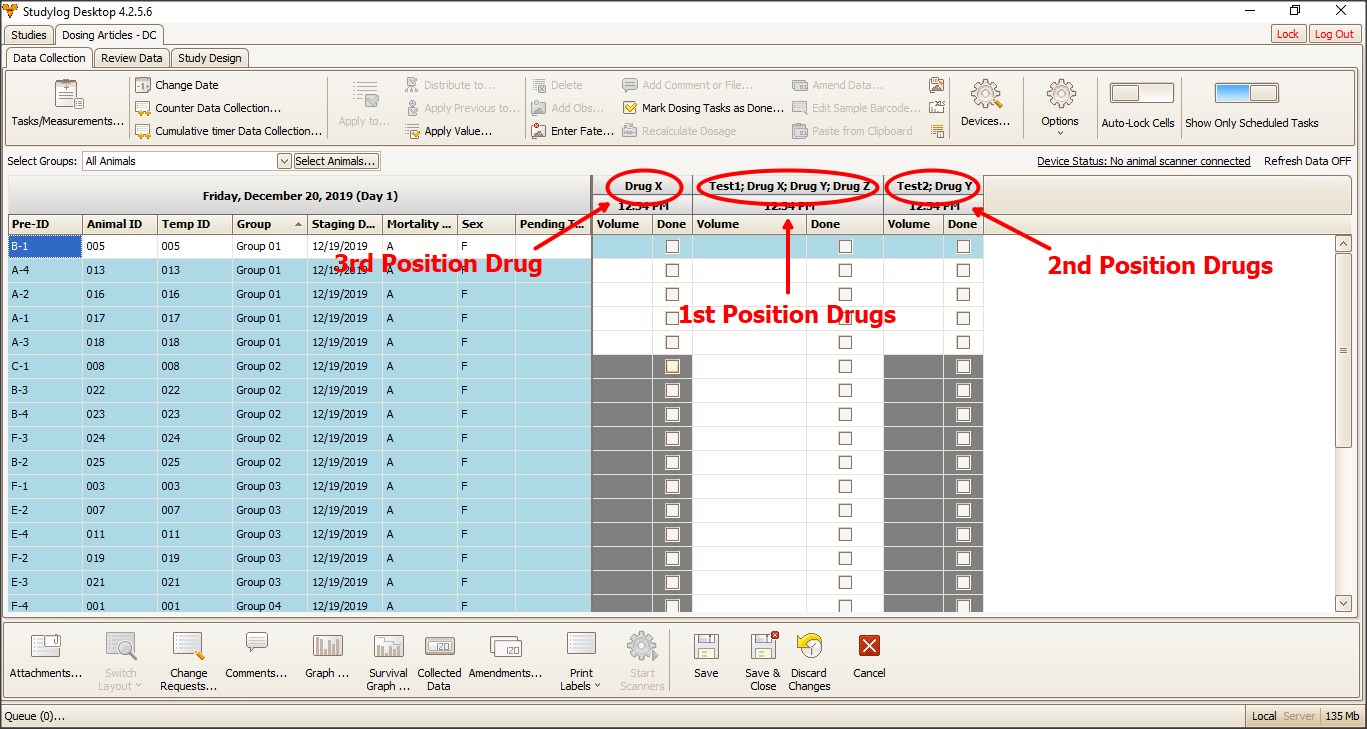 Drug X from Group 1 is now in its own column on the left as it is the only 3rd position drug. Because the animals on the left (blue) portion of the screen have been ordered from first to last group, Drug X has been placed in the leftmost position due to it being assigned to Group 1. All drugs in a 1st position are in the middle column and the two 2nd position drugs are in the right column.

Grouping dosing tasks can be a helpful way to consolidate multiple dosing tasks for faster data entry. With all of the tools outlined here, you can order the animals to your liking and complete these tasks more efficiently than ever before in Studylog.