How to Use the Costing Tool

How to Use the Costing Tool

The Costing Tool allows you to generate the estimated costs of conducting a study as well as the cost of the various tasks completed in the study. You can use this to see the potential costs of operating a new study that you have created or review the estimated costs of running an existing one. Here’s how to access the tool: 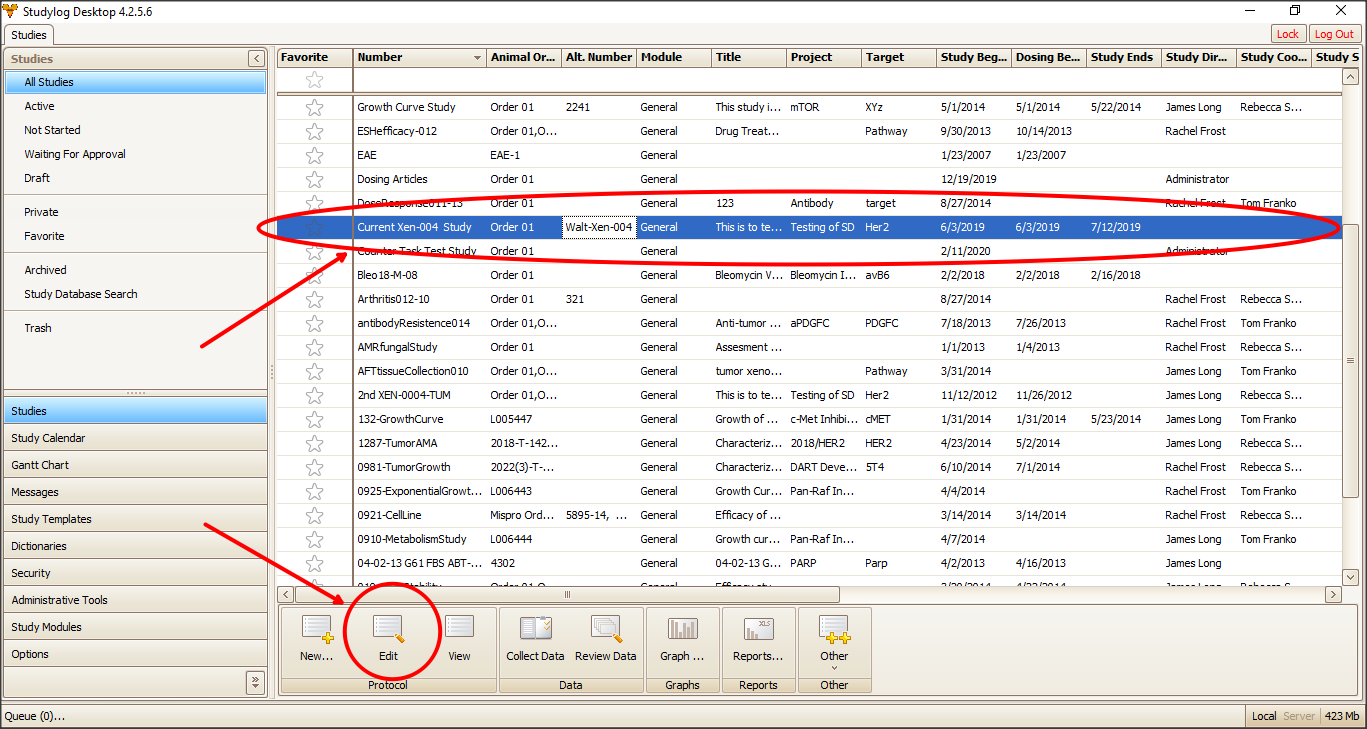 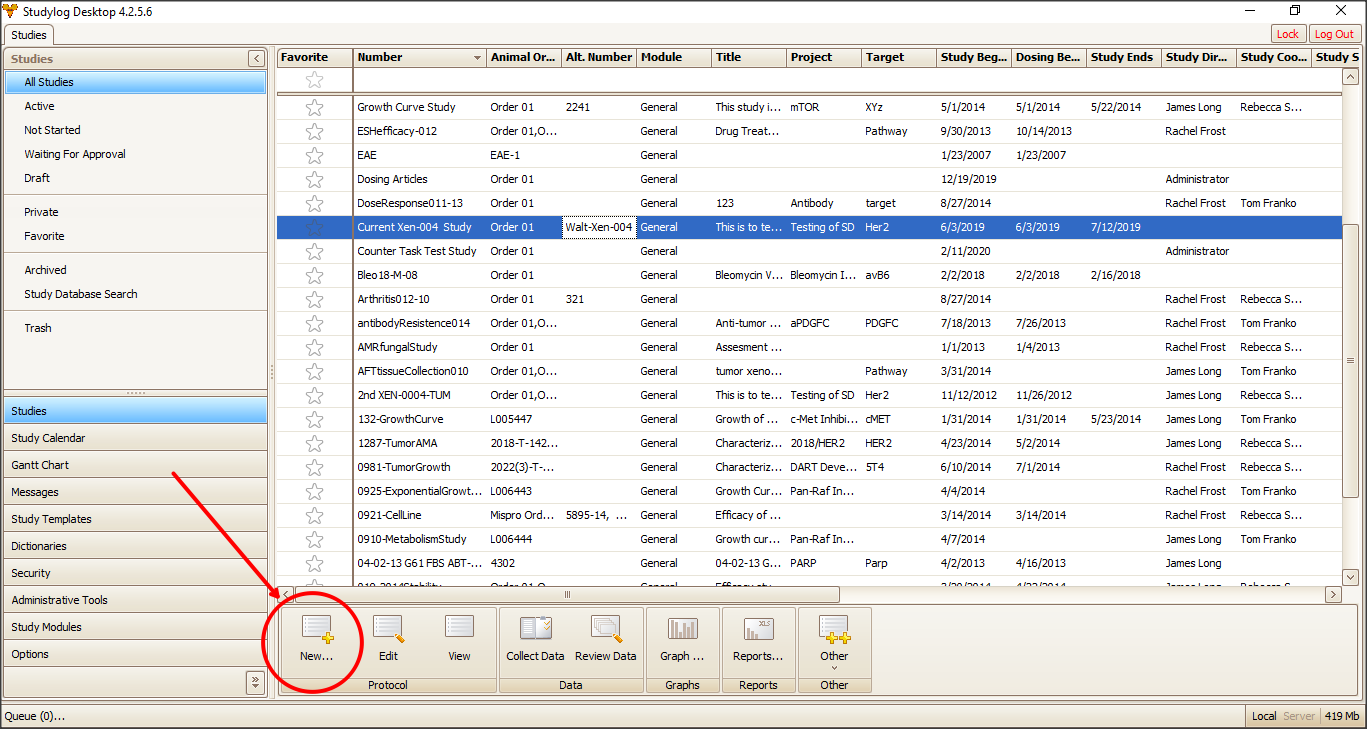 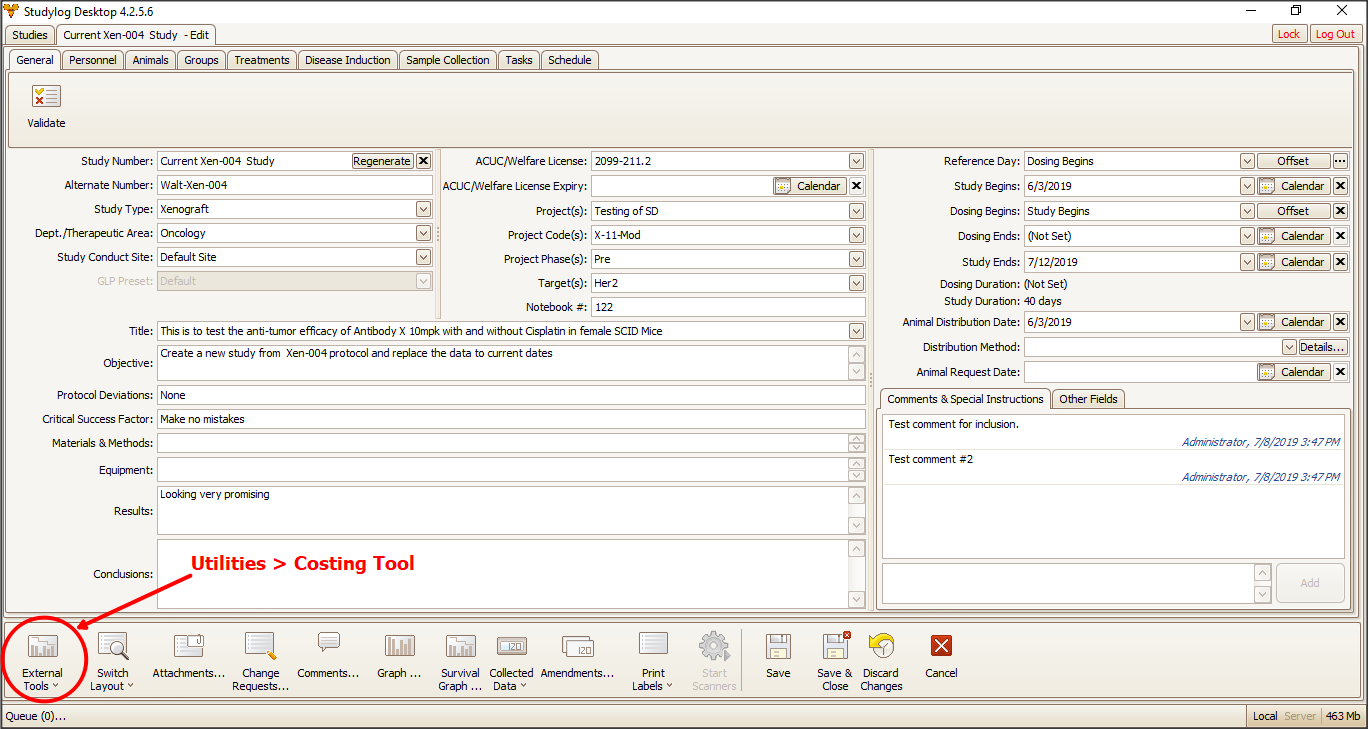 3. In the Study Costing Tool window, you will see two sections. Let us focus on the right side first, which contains all of a study’s tasks. In this example, there is a body weight task, and five dosing tasks. Looking over on the left side, there are several dates; these are the study dates on which data was collected. Under the Body Weight column, the number 45 appears over and over, indicating that all 45 animals were weighed that day. 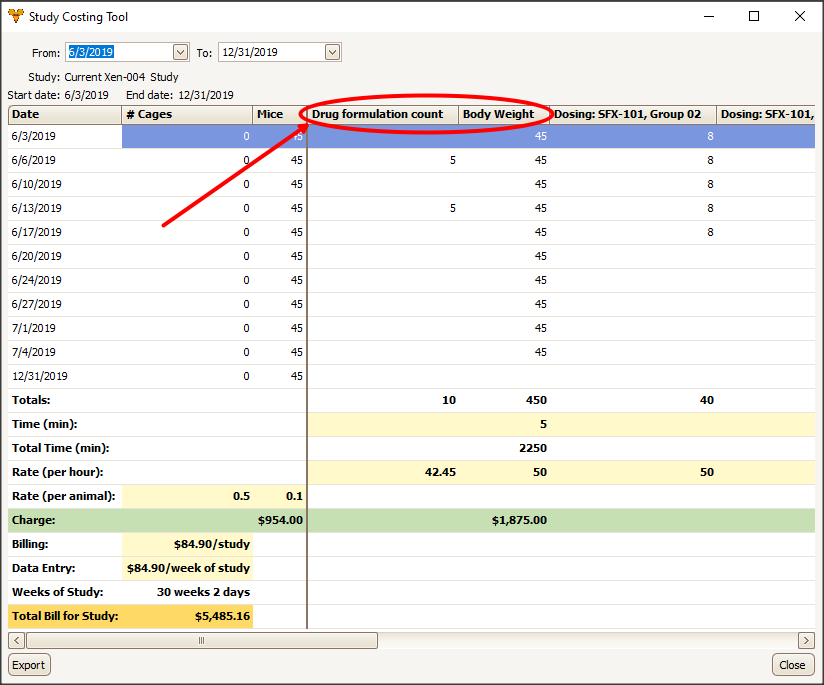 The Drug formulation count column indicates that all five of the dosing tasks had been administered that day. On the right side, there are two yellow rows which allow for user-inputted values. The first one is for the Time (min) value shown on the left. This is where you can enter the time in minutes that each task takes to complete. The total will be shown below, in the Total Time (min) row directly below. The second yellow row on the right side of the screen where you enter the Rate (per hour) for each task. 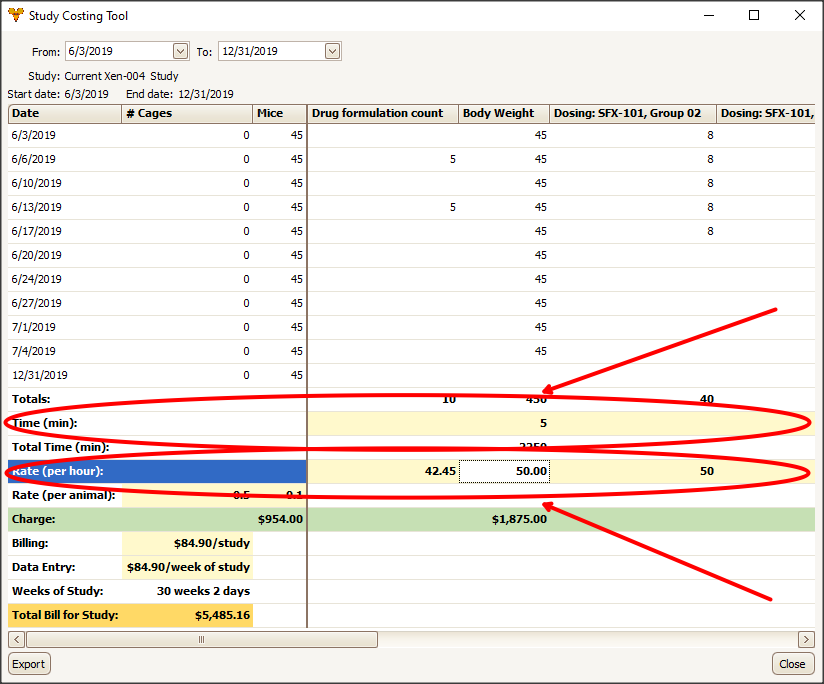 Let’s see how this operates in practice using the body weight task from the example above. In the example below, the charges have been calculated using the Rate (per hour). The number in the Totals row is the total number of body weight collections- 450. The value entered in the Time (min) column is 5. 5x450 = 2250, the Total Time (mins). The rate per hour is set at $50. 2250/60x50 = $1875; the total cost of operating that task for the entire study which is shown in the Charge column. 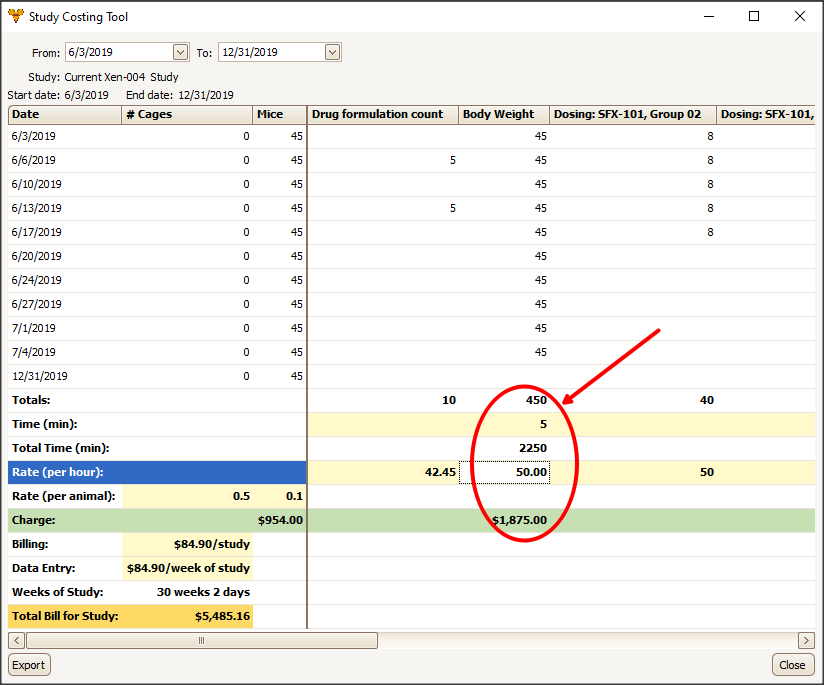 After this, if you wanted to calculate the cost of operating this task with the Rate (per animal) instead, here are the steps you would have to take.

First, delete the value entered for Rate (per hour). 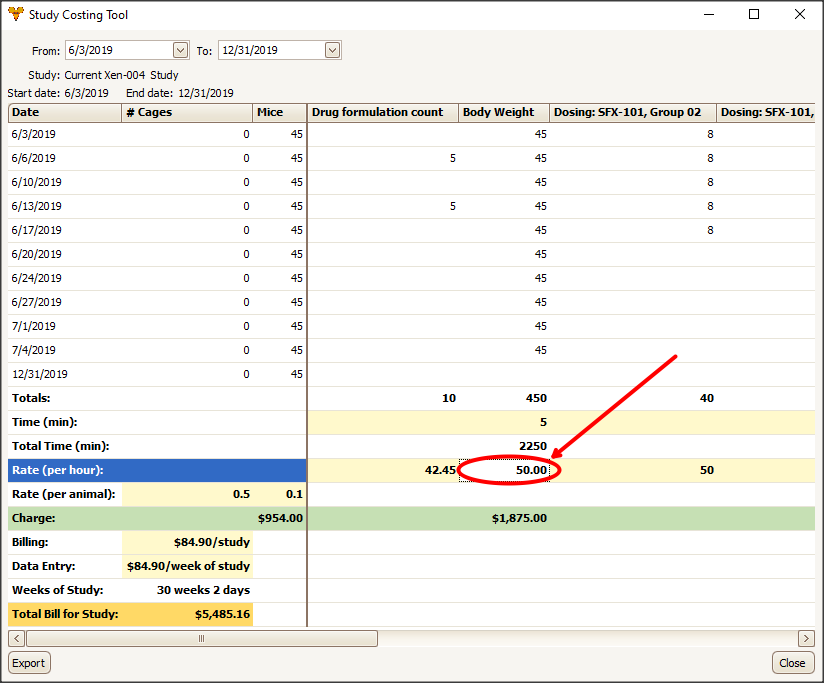 Then, enter in your new value in the Rate (per animal) row. 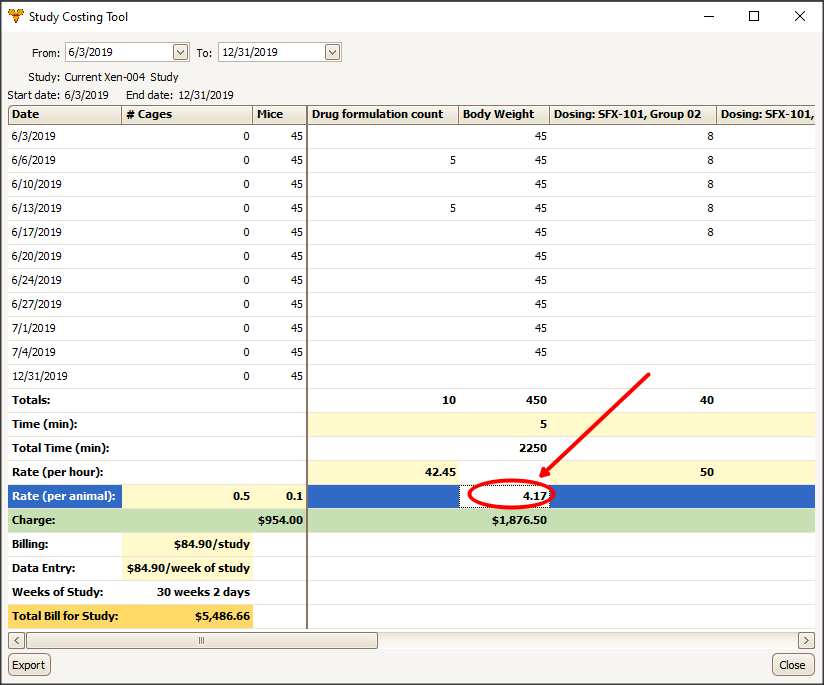 The number in the Charge row for that task will adjust automatically. 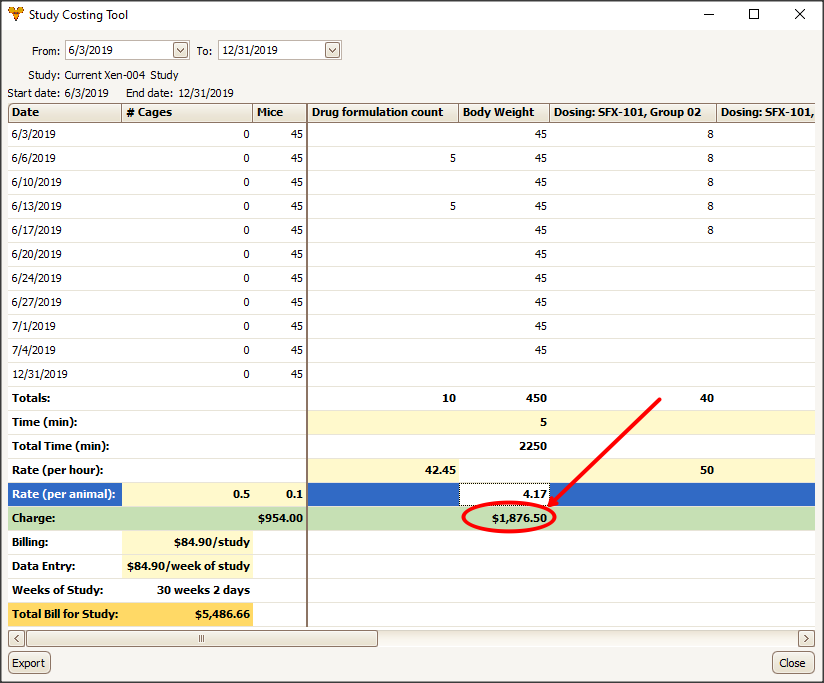 Lastly, let’s take a look at some of the numbers on the left panel of the window. 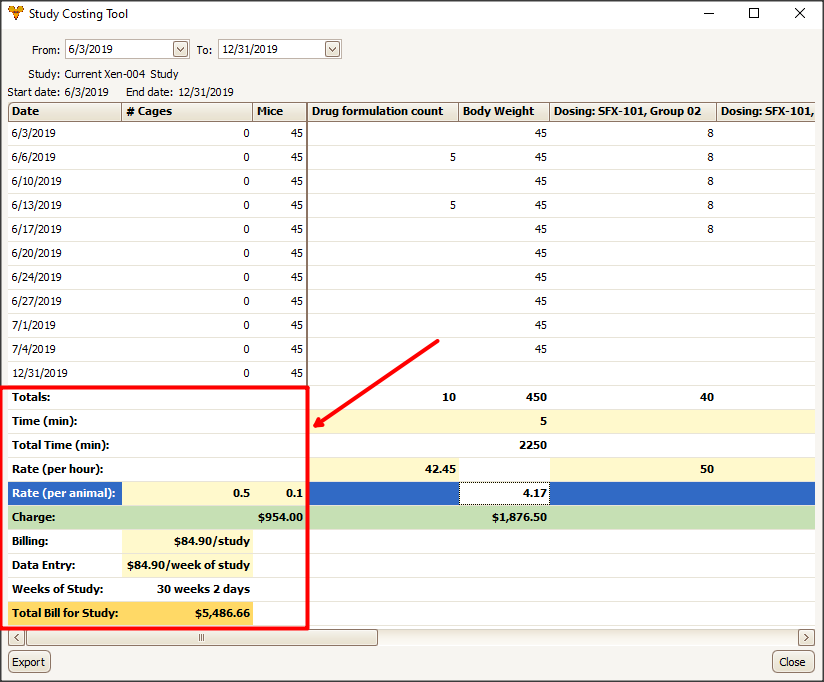 There are two numbers in the Rate (per animal) row at the bottom of the columns for the # Cages and Mice; these correspond to the cost of each cage and each animal, respectively. It is from these numbers that the Charge value is calculated, which refers here to the total cost of the animals in the study. The Billing and Data Entry costs are user-defined. The Weeks of Study amount is calculated from how long the study has been in operation. Finally, the Total Bill for Study is a combination of the total charges for each task. In this example, this is the sum of the $1876.50 calculated for the body weight task, the cost of all the animals ($954.00), the weekly data entry cost ($84.90 x 30.28... = $2571.26), and the billing cost ($84.90), which totals $5486.66.

This tool is not intended to give exact operating costs, but rather to provide a conceptual space for the costs generated through study activity. Experiment with entering the values you want until you get your desired results.